Hanna Burke on “Why Is Everyone Laughing?” 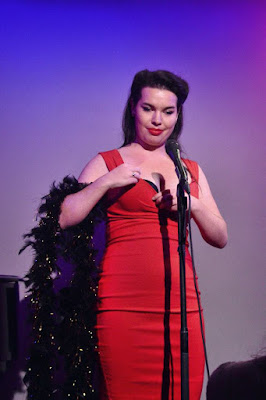 Who is this girl?
Hanna Burke performs “I’m Tired” at the Met Room.
Photo by Maryann Lopinto.
I had never met Hanna Burke before Joseph Macchia, the producer of our “Gone Too Soon” tribute last September, brought her to us. We were told that she had been thinking of putting together her own Madeline-themed cabaret act, and that she wanted to sing “I’m Tired,” Madeline’s signature number from Blazing Saddles. I figured the girl must have either colossal talent or colossal chutzpah, and when she launched into the song during the mic check, the afternoon of our show, I had only to look at the enraptured expression on Joan Copeland’s face to see that Hanna Burke had both talent and chutzpah. “Who is that girl?” Joan wanted — we all wanted — to know. Without slavish imitation, Hanna at once evoked Madeline and made the song her own.

Inspired by meeting Joan, Walter Willison, Michael Cohen, and Lawrence Leritz (all of whom worked with Madeline), Hanna began planning in earnest for her Madeline Kahn act. Indeed, I saw a glimmer of Madeline’s own background. Like Madeline, who began her career by performing at the Upstairs at the Downstairs club, Hanna works at the Metropolitan Room (the setting for our “Gone Too Soon” tribute). Both young women — at roughly the same age — can watch other performers, learning from them. Madeline used to sneak into the Downstairs room to watch solo artists like Mabel Mercer and Joan Rivers, both of whom fascinated her.

Meanwhile, Hanna’s copy of Madeline Kahn: Being the Music • A Life grew battered, bristling with Post-It notes to mark its pages, and the show took shape. Calling it “Why Is Everybody Laughing?” (after Madeline’s perpetual question on the set), Hanna unveiled the show on June 24 at Don’t Tell Mama. Now she’s returning to the Metropolitan Room for a second go-round on July 17. This seemed an excellent opportunity to ask who this girl is, and to share her answers with you. 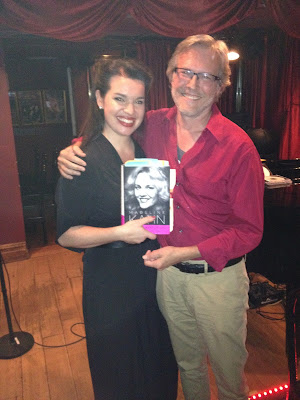 Artiste and author:
Hanna Burke with WVM at Don’t Tell Mama.
Q: How did you come up with the idea to do this show?

HB: Actually, it was from seeing another cabaret at the Metropolitan Room. It was this gentleman who did a tribute to a musical theater composer. It was just this flawless accumulation of songs, stories, very flowing. It was one of the best shows I have ever seen since working at the Metropolitan Room. It really caught my eye, and I thought, “That’s the kind of show I want to do.” I asked myself who do I want to do, and then I thought, Madeline Kahn, of course! It’s kind of a random way to decide it, but when I thought of doing it on Madeline, it completely made sense, and I was shocked that I never thought of it before. I grew up watching her, and mimicked or imitated or memorized all of her lines in movies throughout my childhood, and my adulthood now, too. It was a weird way to get the idea, but once I got it, it made perfect sense.

Q: There are places where your rep intersects, too, aren’t there?

HB: Like Madeline, I started singing operatically. Also, even before that, the reason I’m doing musical theater today, is seeing Young Frankenstein as a musical. Obviously, it was not Madeline [onstage], but seeing that role brought to life in a musical form was the light bulb moment I had, where I realized this was what I wanted to do. Immediately after that, I walked out of the theater and said, “That’s what I want to do.” My parents were like, “Are you sure?”

I went to college and studied operatic singing at first, which was not necessarily on purpose. The school I went to didn’t have a musical theater program. But I think I did want to be trained legit anyway, just because singing opera is the piano of instruments, it’s the basis of all technique. That’s kind of where my voice fit in and has stayed. I don’t do a lot of pop and contemporary stuff. I don’t really work in that kind of — I can fake it real well, but it’s just not where my voice lies. So then I transferred to a musical theater conservatory. The first comedic song that I was assigned — they had kept me doing ballads and legit, because that’s what I was trained in. It was perhaps the same way that Madeline was working at the Upstairs at the Downstairs, or when she met Michael Cohen, she was doing more legit stuff, but at some point he realized that she was hilarious, and she went into that direction. Kind of the same thing happened with me, I was singing serious legit ingénue songs, and then they would see me being silly with classmates. So my teacher said, “Try this,” and he gave me “The Cookie Chase” from Anyone Can Whistle. I listened of course to Madeline’s version of “The Cookie Chase,” and I was very excited that she had done it already.

From then on, they continued to give me more and more comedic stuff, just to see what I could do. It just is what I work in today, is that character acting type of thing.

Also a few semesters later, everybody at school knew that I loved Mel Brooks and Madeline Kahn. I could not shut up about it and they were like, “Yes, Hanna, we know.” Not that I ever had mentioned it to teachers, really, I was assigned in an acting class several scenes from The Sisters Rosensweig, and they cast me as Gorgeous. Which was very fun. I wish that I could see the video at Lincoln Center Library. I obviously didn’t have that when I was in L.A. Once I researched it, I found it very exciting that Madeline originated that role. It kind of gave me an idea of how — not that I’m trying to copy her — but an idea of how she played it. I don’t think I did it exactly the way she did, but it was fun to think about that. 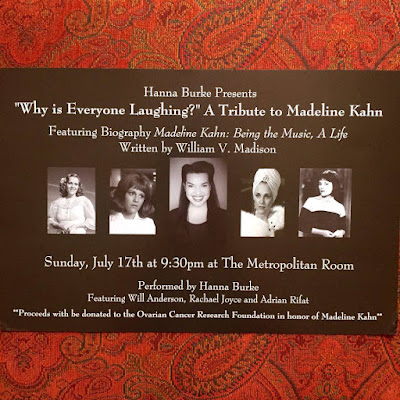 Q: Where are you from?

HB: Originally, I am from Maui, Hawaii. Then I grew up for the second half of my grade-school years in the San Juan Islands in Washington State. Tough life! Very secluded.

HB: Yes. Growing up, I never, ever ever sang or did any type of theater. I played instruments, saxophone and piano. So it was quite a shock to people when I went to college at Oregon State University and became an opera major, when I had never sung in front of anybody in my entire life.

Q: Had you seen opera before?

HB: No. Ridiculous! I have tried several times and never gotten tickets. I need to try more — I just don’t have the time. If you ever are looking at something, please let me know. The irony of my life — two ironies, one that I’m afraid of water, having grown up on islands, and two that I’m an opera major and have never seen an opera. Perhaps that’s just because I went more toward the legit side of musical theater, and I’ve been putting more focus on that. Even though Broadway seems to be more into pop nowadays.

Q: Where was the conservatory?

HB: The American Musical and Dramatic Academy in Los Angeles. There’s an L.A. campus and a New York campus; I went to the L.A. campus. I ended up going there because Oregon State didn’t have a musical theater program, and that’s what I really wanted to do. Then I got there and all my teachers were pushing me to get my masters in opera. I was there for three years. Then I went home for a summer and moved to New York after never, ever being here before. I don’t know what I was thinking! I certainly had my meltdown. I had traveled to Europe and other countries and have never had culture shock, until I moved here. That was for a lot of reasons. It was the first time I didn’t have any sort of adult figure or school to fall back on, I was by myself for the first time in a foreign city, with stories that were probably from the ’70s and ’80s that I had heard were terrifying. I describe my experience like snowboarding. The first two days are a disaster, and by the third day you’re fine. By my third day here, I was set, and ready to go.

Q: What are you trying to do with the show?

HB: I think it’s become a way to bring Madeline back, especially for my generation to make her — not relevant, I guess, but almost introducing her or reintroducing her to my generation, because I feel like she got kind of lost in the shuffle. Everybody knows Bernadette Peters and other comedians from the ’70s, but often in my generation I say to people, “Do you know who Madeline Kahn is?” And they say, “I don’t know,” and I say, “She’s Mrs. White in Clue,” and then they go, “Oh, I love Madeline Kahn.” She hasn’t been around for almost 20 years now, but she was such a huge part of my growing up, and she is still funny in today’s terms, absolutely. She really deserves to be brought up and introduced to today’s generations. Also, I just love her. Doing the show, I can’t think of anything more fun. 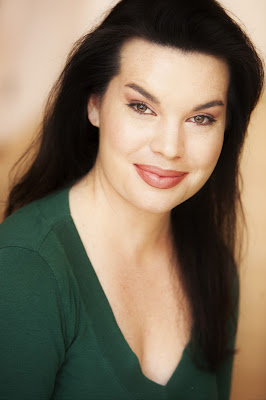