‘Being the Music,’ a Panel Discussion at Drama Book Shop June 11 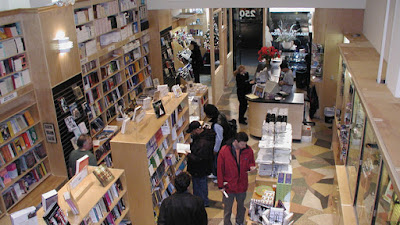 The main floor of the Drama Book Shop.
New York City’s Drama Book Shop will host a panel discussion on the life and career of Madeline Kahn, June 11, beginning at 6:00. We’ve got a spectacular lineup, including

Robert Klein, Madeline’s most frequent co-star, beginning with New Faces of 1968 (though he’d known her a couple of years already) and continuing through The Sisters Rosensweig and Mixed Nuts to a guest shot on Cosby, with multiple stops in between.

Jonathan Lynn, the writer and director of Clue, the only one of Madeline’s most popular movies that comes close to capturing her true character (minus the multiple marriages and murders).

A battalion of seasoned veterans of the war that was Two by Two, including lyricist Martin Charnin and co-stars Joan Copeland and Walter Willison, who earned a Tony nomination for standing up to the show’s tyrannical star, Danny Kaye.

Lee Roy Reams, the Broadway legend who directed Madeline in a touring production of Hello, Dolly!, and whom Madeline credited with helping her to understand how to play Gorgeous Teitelbaum in The Sisters Rosensweig. “When I put on the Chanel suit, I feel just like Dolly on the ramp!” she told him. (And if you didn’t know that Madeline played Dolly — well, you need to read the book.)

Maddie Corman, who played Madeline’s niece and George C. Scott’s daughter in the sitcom Mr. President. If we’re lucky, Maddie will do her flawless impression of Madeline, and she’ll also give us an idea what it was like to work with Madeline in television.

and Lawrence Leritz, the director–choreographer–dancer whose guest shot on Cosby provided him with valuable insight into Madeline’s personality. Lawrence started out as a fan of Two by Two, which led to a revealing conversation with Madeline.

That lineup is subject to change — but even in the audience I’m expecting to see more of Madeline’s friends and colleagues.

I’ll moderate, and I’ll also be available to sign your copy of the book after we wrap up the conversation, around 7:00.

Posted by William V. Madison at 1:36 PM No comments: 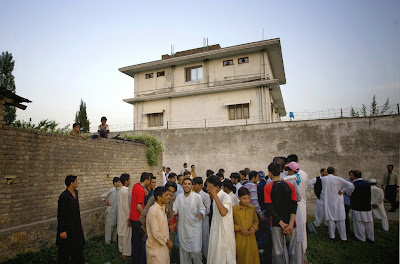 The bin Laden compound was notably free of movie-star biographies, analysts say.
WASHINGTON -- According to recently declassified papers released this week by the Office of the Director of U.S. National Intelligence, Osama bin Laden’s collection of English-language books at his Abbottabad compound did not include any copies of William V. Madison’s Madeline Kahn: Being the Music • A Life (University Press of Mississippi, 2015).

Four years after the raid that led to bin Laden’s death, intelligence experts analyzing materials seized by U.S. Navy SEALs have noted that the al Qaida leader’s reading interests focused primarily on U.S. foreign policy, international relations, and Islam, but not on biographies of Oscar-nominated comedic actresses from the last third of the twentieth century. Even bin Laden’s personal correspondence, stored in his computer files, shows little mention of the beloved star of Blazing Saddles and Paper Moon. 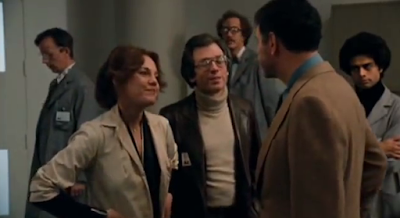 Intelligence analysts discuss their findings.
“Especially after he realized that her name is spelled K-A-H-N and not K-H-A-N, bin Laden doesn’t seem to have given any thought to the late actress,” Maj. Gen. Fred G. Corey told a reporter. U.S. intelligence sources believe bin Laden had serious reservations about a Jewish woman from New York City who had a sense of humor and who frequently appeared in public without a veil, “except briefly in that scene from Clue,” Corey said. “I’m also given to understand that Ms. Kahn was unmarried for most of her life, and when she did marry, she did so without regard to her estimated value in goats.”

Dr. Carl Becker of the Institute for Advanced Concepts agrees. “Madeline Kahn’s behavior was not that of a woman whom bin Laden would admire or want to read about — and that’s a good thing,” Becker explained. “It’s not going too far to say that reading Madeline Kahn: Being the Music • A Life means standing up for freedom and decency.” 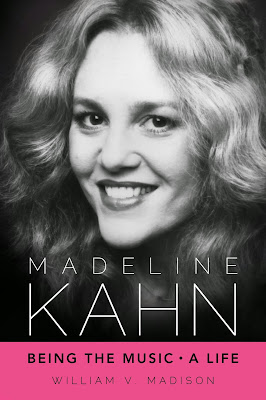 The Book: How to Get It, What to Do with It 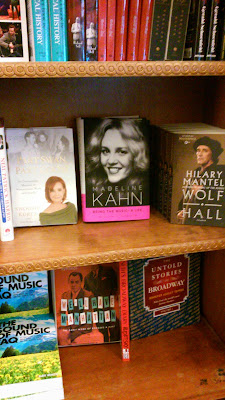 What well-dressed shelves are wearing this season.
Photo by Lawrence Leritz.
Officially, May 1 was the publication date for Madeline Kahn: Being the Music • A Life — though several days earlier I began hearing reports of sightings of the book in some stores in New York, and the distributors for the Amazon and Barnes & Noble websites managed to deliver several copies well before the dawn of May 1. My “author copies” — a term of art, meaning just what you think it means — arrived on my doorstep April 22, and I nearly tripped over them as I dashed out of my apartment.

At long last, almost seven years to the day since I started this project, I opened a box and found ten copies of Madeline’s story. Yes, I cried. I’m not ashamed to admit it.

Chances are that you haven’t been waiting quite so long to get your copy, but there’s a very real chance that you don’t have a copy yet. How to get one? There are several ways.

First, you really can order the book online, either in the electronic or in the print edition, from Amazon (where we’re the top-selling new release in theater biographies) and from Barnes & Noble; the electronic edition is also available from some other dealers. If you prefer hardcover books, you can also ask for Being the Music at your local bookstore, and if they don’t have it in stock, you can ask them to order it for you. Independent bookstores love to order books for customers — and often they’re just about as speedy as online services. If you’re in the United States, your favorite bookseller can order directly from the publisher, the University Press of Mississippi; in the United Kingdom, booksellers can order copies through the Roundhouse Group.

Once you’ve gotten a copy of the book, the next step is to read it. If at all possible, the next step is to derive enjoyment from it. And then, if you have anything nice to say about the book — tell your friends, and post reviews on the book’s Amazon and B&N pages. If you’ve got a blog and you review the book, please let me know (either here or on the book’s Facebook page). Douglass K. Daniel of the Associated Press has reviewed the book already — but why should he have all the fun?

However, if you don’t like the book, then I hope you will do me the very great courtesy of telling nobody at all. Really. It will be our secret. Thank you. 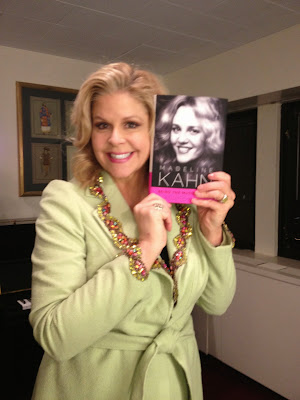 Mezzo-soprano Susan Graham was first to get her copy autographed by the author, backstage after a performance of The Merry Widow at the Metropolitan Opera.
Posted by William V. Madison at 5:17 PM No comments: 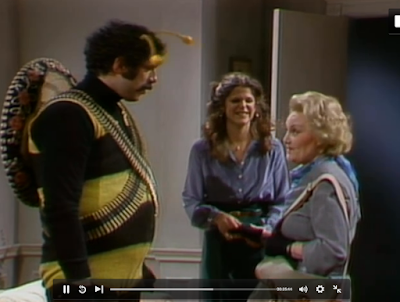 Somebody else’s mother:
Paula Kahn played Gilda Radner’s mother in this sketch
with Elliot Gould on Saturday Night Live in 1976.
As Mother’s Day approaches, you are probably asking yourself whether Madeline Kahn: Being the Music • A Life is a suitable gift for your mother. I am pleased to help you answer that question.

Do you have a good relationship with your mother? If so, you can give her this book with this inscription, “Dear Mom, Aren’t you glad this isn’t our story?” Because Madeline’s relationship with her own mother was often quite difficult.

Do you have a difficult relationship with your mother? If so, you can give her this book with an inscription along the lines of, “Dear Mom, Let’s clean up our act, so that we don’t wind up in a book like this one!”

Do you have a truly terrible relationship with your mother? If so, don’t give her a copy of the book — she doesn’t deserve it. Instead, you can play your own variation of a game that Paula Kahn sometimes played on Madeline. Send her a card, and enclose several bills with a note saying, “Ma, please pay these for me.” 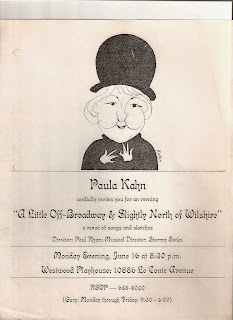 The playbill for Paula’s one-woman show.
Photo courtesy of Jeffrey Kahn.
Posted by William V. Madison at 8:35 AM No comments: