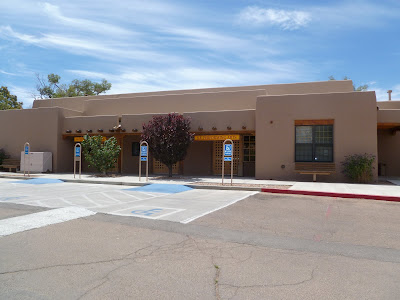 The Armory for the Arts, as it appears today.
Photo by WVM.

Madeline Kahn’s connection to Santa Fe, New Mexico, represents an important chapter in her biography, though it constituted discrete episodes in her life. In the 1980s, she worked with the Santa Fe Festival Theater; in the 1990s, she acted in a European TV adaptation of René Goscinny and Morris’ immortal cowboy comic books, Lucky Luke, and visited her aunt, Virginia Lewisohn Kahn, who lived in the area.

Because the Festival Theater folded in 1985, there’s virtually nothing about it on the Internet, and most of what I knew before last week came from interviews with one of Madeline’s Santa Fe co-stars, Victor Garber; and with the man who directed her in two productions there, a musical adaptation of Franz Kafka’s Amerika and Noël Coward’s Blithe Spirit, Robert Allan Ackerman.

Clearly, I needed to visit Santa Fe for myself and to search for traces of Madeline’s time there. Susan Graham’s concert with Santa Fe Opera provided an ideal target date for my trip, and so last week, when I wasn’t listening to music and hobnobbing with the gratin of Opera World, I was poking around the Santa Fe Public Library, the New Mexico State Library and Archive, and the theater where Madeline worked, the Armory for the Arts. 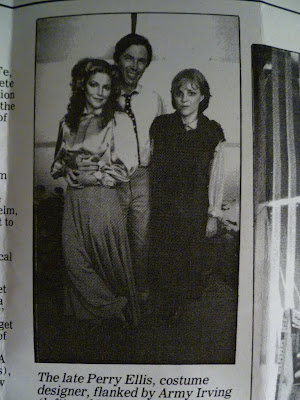 Blithe Spirit: Amy Irving, costume designer Perry Ellis,
and Miss Madeline Kahn.
WVM photo of an uncredited photo in the New Mexican’s
Pasatiempo section, Sept. 19, 1986.
Among the first and most important lessons I learned was the confirmation of the correct name of the theater group: not the Santa Fe Theater Festival, but the Santa Fe Festival Theater. These distinctions can be meaningful, but in this case it’s somewhat fine. From an interview with artistic advisory board member Angela Lansbury, on the front page of the New Mexican on June 17, 1981, the Festival Theater’s reasoning was explicit: if Santa Fe could sustain an opera festival, it could sustain professional theater, as well.

Speaking with the local newspaper just prior to the first opening night (The Front Page, on June 29, 1981), Lansbury, producing director Thomas Gardner, and executive director Christopher Beach promised a mix of young professionals and seasoned veterans in repertory that allowed them to branch out in new directions. (The first season’s other offerings were Cyrano de Bergerac, starring Michael York, and Ted Tally’s Terra Nova.)

With matching funds from the New Mexico legislature, the Festival Theater renovated the National Guard Armory, a WPA project, completed in 1940, that stands on Old Pecos Trail. Today, the theater occupies roughly half the building, while the other half is devoted to a museum honoring the state’s servicemen and –women. A disproportionate number of New Mexicans having been forced on the Bataan March, the museum is named the Bataan Memorial, and the collection, covering a number of military conflicts, is judiciously chosen, tastefully exhibited, and always thought-provoking. 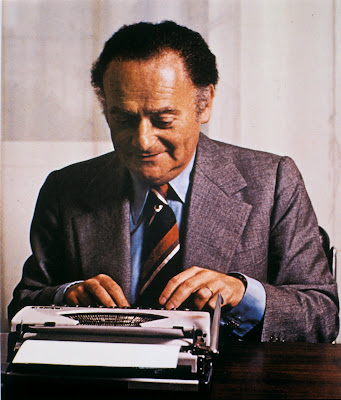 The creator of Lucky Luke, René Goscinny at work.

The theater itself seems tiny when one considers the outsize ambitions of the Festival’s founders: just 340 seats, it hardly seems the venue for such all-star productions as Blithe Spirit, which starred Madeline, Victor Garber, and Amy Irving; or The Glass Menagerie, in which Irving starred as Laura opposite her real-life mother, Priscilla Pointer.

With hindsight, some of the repertory choices seemed to spell the Festival’s doom. The second season, for example, featured not one but two world premieres, Amerika, with a book by Israeli playwright Yoram Porat and music by Shlomo Gronich; John O’Keeffe’s Western spoof, Wild Oats, preceded it. It’s tough even for an established theater to generate audiences for new work; for a fledgling troupe, the challenge must have been even greater.

Even some of the casting choices seem puzzling in retrospect. It’s easy to justify Madeline’s casting in Amerika: she played three roles, which must have helped to stimulate interest in the new work. Blithe Spirit is a more curious case: Irving played the disruptive ghost, Elvira, a part in which she surely excelled and yet one that would seem tailor-made for Madeline instead. For her part, Madeline played the loopy medium, Madame Arcati, a role indelibly associated with Margaret Rutherford and Beatrice Lillie, and one for which just about everyone (including Garber and Ackerman) agrees Madeline would be ideal today — nearly 30 years after the show closed. But the mission of the Festival Theater was to give established stars a chance to do something different, and so audiences saw a too-young Arcati. 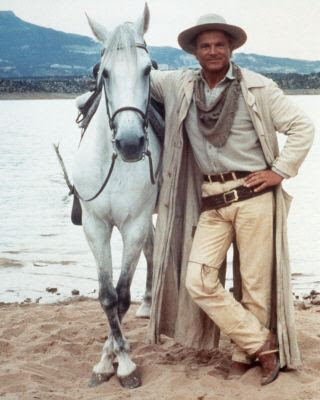 Learning more about Lucky Luke may be challenging. During my sojourn in France, Goscinny’s daughter, Anne, moved to capitalize on her late father’s legacy, as well as the mammoth success of a live-action movie adaptation of Goscinny’s best-known work, Astérix. We got sequels to Astérix, a live-action adaptation of Iznogoud and a tidal wave of Le petit Nicolas: two books full of previously unpublished short stories, a live-action movie, and an animated TV series, to say nothing of greeting cards and school supplies.

An animated series of Lucky Luke has been a staple of French TV (and in-flight entertainment on airplanes!) for years; during the glut of Goscinny movies, we got a new animated feature film, starring the voice of Lambert Wilson as the voice of the eponymous hero, a laconic cowboy gunslinger who draws faster than his own shadow. And in a live-action feature, Jean Dujardin, Oscar-winning star of The Artist, took the role. The 1990s live-action TV series, largely a German effort, may have represented the kind of competition that the copyright holders preferred to squelch: in any case, the principal trace I’ve seen of the show is a couple of Polaroids showing Madeline in her costume as Esmeralda, a Gypsy. [UPDATE: All the Lucky Luke episodes are available for streaming on Amazon; Madeline’s episode is pretty good, and it features some delightful teamwork with Julie Hagerty.]

There’s a great deal more I hope to learn about Madeline’s time in Santa Fe: if you or anyone you know can enlighten me in any way, I hope you’ll get in touch with me. 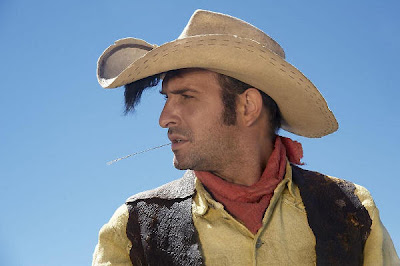 Dujardin’s Lucky Luke was infinitely more faithful than Hill’s to the original design by Morris, one of the greatest artists of bandes-dessinées.

NOTE: Having grown up in Argentina and lived as an adult in New York City, René Goscinny possessed boundless appreciation for non-French culture (including American cowboy movies), and it informed his writing. It is a truth universally acknowledged in France that, had Goscinny not died prematurely, he would have been the first comic-book author to be inducted into the Académie Française. But die he did, and none of his predecessors has received that honor.

Posted by William V. Madison at 9:54 AM No comments: