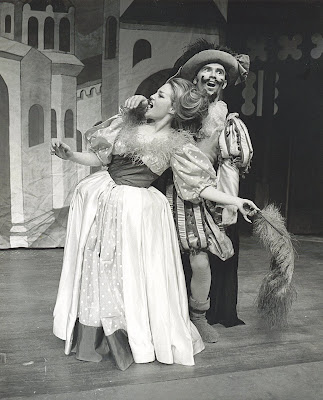 It’s not my intention to pre-publish Madeline Kahn’s biography in this space — you will have to wait to read it, and you will, I hope, pay willingly for the privilege of doing so. But I’ve just spent several weeks in the United States, beginning my research and interviews for what promises to be a great story, and I’d like to share a few initial impressions. She was, from what I can tell, precisely the kind of girl I’d have fallen for when I was younger.

If I’d known her when she was in college, I’d have worshiped her. She was wonderfully smart — the Dean’s List at Hofstra, I discovered — with a questing mind and an enduring desire to explore. Many of the subjects that interested her are ones that interest me, and in going through her appointment books (on which I pounced), I see that she meticulously recorded every movie, opera, concert, and art exhibition she attended. Sure, a lot of actresses go to the movies because they think it will be good for their careers: they hope to work with a particular director some day, or they want to be seen at a premiere. But Madeline’s interests seem sincere, personal. She preferred ordinary, everyday screenings at New York’s movie houses, and as for professional aspirations, she can’t seriously have hoped to be cast in an Ingmar Bergman movie: yet she assiduously caught every picture as it came out. Again and again, I found myself wanting to speak to her, to ask not about dates and places but about what she thought of a picture or a piece of music.

Those appointment books are kept with a graceful handwriting, and you can go months without finding a misspelled word or fault in punctuation. I like that about her, too. (I wish she’d kept a journal — but a biographer can’t have everything.)

I don’t mean to suggest that her appeal is exclusively intellectual. She was beautiful, as you can see. And a Jewish girl who loves music and who acts — well, that’s a well-known recipe for stealing my heart.

I’m much interested in Madeline Kahn’s development as a performer, and so it was almost distressing to discover recordings she made around 1965 — when she was 23 and freshly graduated from Hofstra. On two albums of revue shows at Upstairs at the Downstairs, a Manhattan nightclub, I hear the singing voice already mature, and the speaking voice already imbued with that strange musicality that so distinguishes her work on film and television. However her performing persona evolved, the process was nearly complete by the time she made her New York debut.* 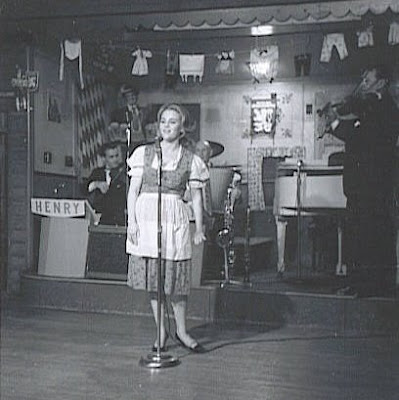 Singing for her supper: At the Bavarian Manor
Photo Courtesy of Jeffrey Kahn

You can see her poise in photographs from one early job, singing Friml and Romberg numbers at a Long Island restaurant called the Bavarian Manor. (The gemütlich surroundings inspired her to use a stage name for the only time in her career: “Madeline Kahn” being perhaps a bit too Jewish, she adapted her middle name, Gail, to become “Madeline Gale.”) A few, fascinating pictures show her in — of all things — the madrigal opera L’Amfiparnaso by the Baroque composer Orazio Vecchi. If these pictures were taken yesterday, you’d say some college kid was imitating Madeline Kahn — but she’s the original article, at merely 21 years of age. The trademark verve is already in place, as you can see.

L’Amfirparnaso isn’t an easy sing, either, and I understand better that she really might have had a career in opera. In 1970, she sang Musetta in Puccini’s La Bohème for what would become the Washington National Opera, opposite the Marcello of Alan Titus, later one of the great Wotans of our time. I’m told that James Levine, maestro of the Metropolitan, is an enthusiastic admirer, and I know that she met sometimes with Julius Rudel, then the director of New York City Opera; it’s easy to imagine her being engaged for Die Fledermaus, say, singing to great acclaim, whenever and wherever she chose. Instead, she confined her singing to other stages and the screen, but both Teresa Stratas and Marilyn Horne tell me she came backstage after every performance at the Met, to pay her compliments.

Very often, then, I wonder what other directions her career might have taken, especially during the 1980s, when she weathered a number of weak films and short-lived television series. I wonder, too, what roles she might be playing now, had she lived. She yearned for meatier parts, and the thought of her as Amanda Wingfield, in The Glass Menagerie, thrills me, to cite just one example that might exploit her gifts for humor and pathos. (As well as her musicality — since the text of Glass Menagerie is very much a score for the English language.) Maybe you can think of other parts you’d have liked to see her in.

As I talk with people who knew Madeline Kahn, I’m getting a sense of her personality, too — but I’ll save that for another time. The effect of all this research, though, is something very like a crush, on a woman I never met.

That may be a danger, a setup for disillusionment, although I’m prepared for Madeline Kahn — indeed, for anybody I admire — to possess a few foibles and faults. I’ve been lucky enough to work very closely with two people whom I admired extravagantly before I ever met them: Teresa Stratas and Dan Rather. Neither turned out, on close inspection, to be a saint. That doesn’t detract from their achievements, however; each remains the best in the field. And if my association with them meant knocking them off of pedestals, it compensated with better understanding. Idolatry was replaced with deeper, more substantial feeling. (My trip to New York entailed remarkably happy reunions with Teresa and Dan, neither of whom had I seen in a long while.) So, too, I expect will be my experience of Madeline Kahn.

It’s in the nature of such projects that, for their authors, they take on the quality of a personal adventure. Mine has begun.

*Madeline Kahn’s female cohorts at Upstairs at the Downstairs are especially noteworthy, including Fannie Flagg, a certain Genna Carter (before she changed her name to Dixie), and the omnipotent Ms. Lily Tomlin. Another costar was one of my boyhood idols, Betty Aberlin, who turns out to have been a Manhattanite and college graduate, not a Pittsburgh high-school student, when she was cast in Mister Rogers’ Neighborhood. I’m confident that Fred Rogers never heard her imitation of a phone-sex operator before inviting her to the Land of Make-Believe.

Posted by William V. Madison at 9:07 AM No comments: