Ranking the Movies of Madeline Kahn, Part I 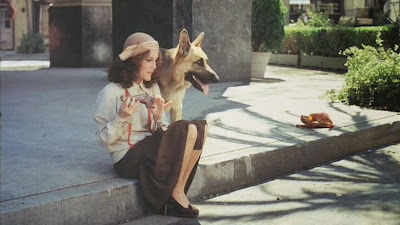 Madeline with Gus in Won Ton Ton. The dog’s approach to acting led Madeline to reflect on her own methods. (But you’ll have to read the book to find out what she said.)
Writing Madeline Kahn’s biography has given me the opportunity to revisit many films I love — and the obligation to watch other films I missed the first time around. The classics hold up well, and few actors will ever rival the swift succession of brilliant projects that launched Madeline’s career: What’s Up, Doc?, Paper Moon, Blazing Saddles, and Young Frankenstein. Along with Clue, those movies are the foundation on which Madeline’s reputation rests, and chances are, you’ve seen them already, or you wouldn’t be here now.

As I combed through Madeline’s legacy, I made a few sparkling discoveries, too: buried treasure, if you will. But not every one of Madeline’s movies, and not every one of her performances, delivers the promised pleasures. Some of her films I can’t recommend except to her most hardcore fans, and others don’t do much to help our understanding of what made Madeline such a memorable performer. While it’s important to note that I watched at home, without an audience of strangers to share the experience with me, a remarkable number of the comedies in which Madeline stars are entirely lacking in laughs — and you’ve got to be a completist to want to see them.

As we approach the release date of Madeline Kahn: Being the Music • A Life, I’d like to provide a guide — subjective, opinionated, and open to debate — on Madeline’s screen oeuvre, and I’ll start with the pictures that, really, you can afford to skip.

THE MISSABLE: I WATCHED SO YOU DON’T HAVE TO 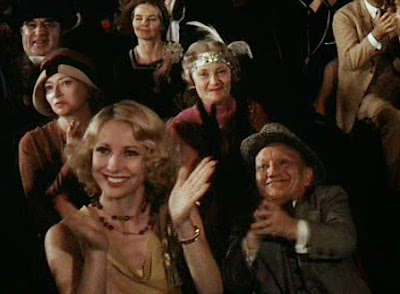 Madeline’s mother, Paula Kahn, worked as an extra in Won Ton Ton. She’s seen here, between and behind Teri Garr and Billy Barty.
Won Ton Ton, the Dog Who Saved Hollywood. What ought to have been a non-musical Singin’ in the Rain, an affectionate, knowing satire of Hollywood in the days of silent movies, turns out to be a stupefying mess, largely due to the directorial ineptitude of Michael Winner (best known for directing Charles Bronson in Death Wish). A cavalcade of old-time stars and the justly beloved Teri Garr are wasted here; co-star Ron Leibman (spoofing Valentino) is downright offensive. Even children who might enjoy a doggie picture are advised to steer clear of Won Ton Ton, whose canine lead spends a portion of the movie trying to commit suicide in several ways that kids really, really shouldn’t try at home. Madeline’s performance earned praise from reviewers (the New York Times compared her favorably with Chaplin, Keaton, and Fields), but seen today she seems at once shrill and tentative. It’s a rare leading role for Madeline onscreen, but it’s no fun to watch. 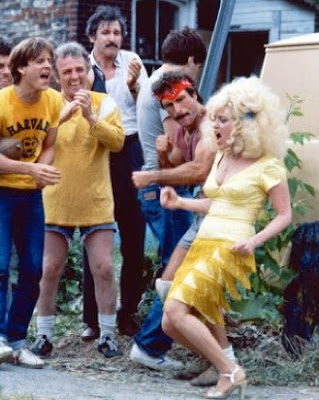 With Grant (far left) and Robert Viharo (in red headband) in Gemini.
Happy Birthday, Gemini. One might develop a theory that, the less confident Madeline was onscreen, the higher she pitched her voice. Albert Innaurato’s hit play Gemini here suffers from a couple of performances aimed not at the camera but at the back row of a very large Broadway theater, and Madeline’s attention-hogging character helps to unbalance the movie as a whole: the central plot, about a Harvard student who’s falling for his girlfriend’s brother, gets lost. Interesting mainly for glimpses of the off-camera relationship between Madeline and David Marshall Grant (as the brother) and as a relic of the earliest days of gay cinema, directed by Richard Benner, whose Outrageous! blazed trails in the genre. 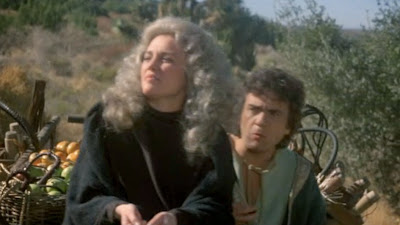 With Dudley Moore in Wholly Moses!
Wholly Moses!. Released after another Biblical spoof, Monty Python’s Life of Brian, this movie suffered by comparison, but even on its own terms, it’s a mess. Vulgar sexual humor mixes with occasional references to Scripture in a screenplay that seems to be scotch-taped together by a chimpanzee in the editing room. Madeline appears very briefly as a purveyor of aphrodisiacs, offering a couple minutes of exposition and not much else. 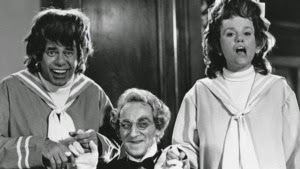 With Lewis and Feldman on the set of Slapstick.
Slapstick (Of Another Kind). Director Steven Paul cheerfully accepts responsibility for the failure of this movie, which really is as bad as you’ve heard. While Paul deserves credit for directing, producing, and co-writing a movie (only his second feature film) on a small budget with big-name stars, he never finds a way to approach the material — a sorta sci-fi story about grotesque twins who are geniuses when they’re together and idiots when they’re apart. Somehow, with Jerry Lewis and Marty Feldman on hand, even the slapstick routines are utterly laugh-free. 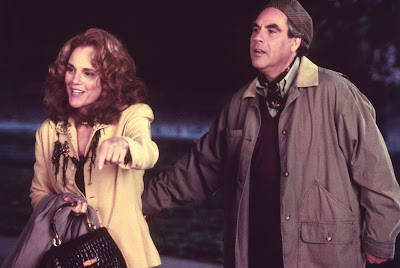 Reunited, again: with Klein in Mixed Nuts.
Mixed Nuts. Nora Ephron’s comedy — an Americanization of the French farce Le Père Noël est une ordure (Father Christmas is a shit) — does find its defenders, especially among fans of Adam Sandler, and maybe it seemed funnier in a theater than it did on video at my house. But really, what plays in Paris is cast adrift in Southern California, and the movie is tonally off, start to finish. Mixed Nuts is redeemed primarily by Liev Schreiber’s wholly committed performance as a suicidal transvestite, and by the teamwork of Madeline and Robert Klein, her most frequent co-star and close friend, just after their award-winning Broadway run in Wendy Wasserstein’s The Sisters Rosensweig. 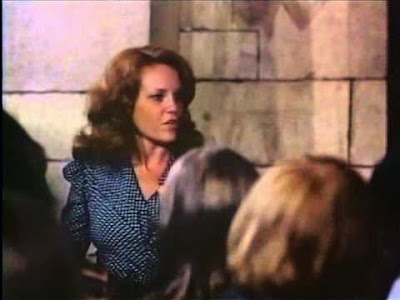 Close to home, in many ways: Madeline lived near the Metropolitan Museum of Art, making an easy commute for filming her single scene in Mixed-up Files.
From the Mixed-up Files of Mrs. Basil E. Frankweiler. This adaptation of E.L. Konigsburg’s Newbury Award-winning novel is pretty bad, actually, and even as a kid I squirmed at the amateurish performances of the child leads around whom the entire movie revolves. But for about three minutes, Madeline commands the screen, playing a schoolteacher on a field trip who’s so harried that she doesn’t realize that two of the kids in her group aren’t really her students. Madeline had taught school and wears precisely the sort of outfit she’d have worn in real life: she seldom got the chance to play a character so much like herself. Best advice: watch the clip of Madeline’s scene on YouTube, skip the rest of the movie, and re-read the book. 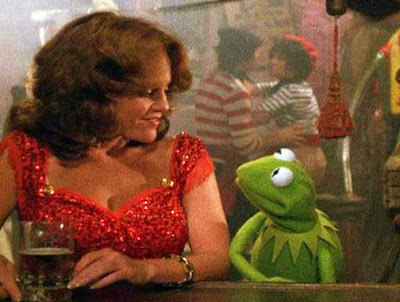 Just a Myth: With Kermit.
The Muppet Movie. Even if you didn’t grow up on this picture, it holds up beautifully, as the beloved characters follow the winding road to the Emerald City of Hollywood. Two of Madeline’s favorite actors, Charles Durning (who played her father in Boom Boom Room) and Austin Pendleton, play the Muppets’ antagonists, and several other friends are on hand — but Madeline shares the screen only with her pal Carol Kane, Telly Savalas, and a certain frog. It’s a fun scene, but, Madeline’s mother possibly excepted, nobody bought a ticket just to see her in this movie. 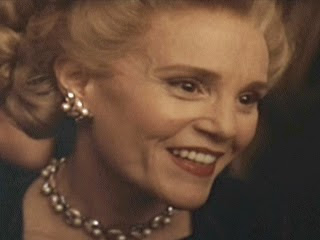 As Martha Mitchell.
Oliver Stone’s Nixon. Madeline’s last onscreen appearance in a studio feature is a cameo role, in just two scenes as Martha Mitchell, the wife of U.S. attorney general John Mitchell (played by E.G. Marshall, who was older than her father). Reviving the Southern accent of Miss Trixie Delight, Madeline provides something like comic relief, though one realizes later that nothing she says is funny. It’s deft, surgical work, showing Madeline at the peak of her powers; instantly she creates a fully rounded character who knows precisely how to wound her husband and Nixon himself.

Posted by William V. Madison at 1:00 PM No comments: