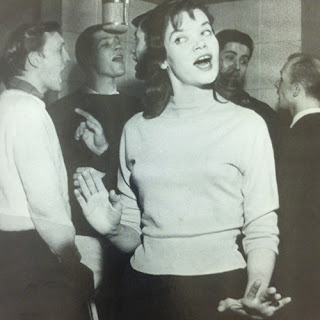 She really did love music.
“Music means more to me than anything,” Eileen Brennan said to me. “Even more than dogs! Even more than cats!” It’s one of the best things anybody ever said to me in an interview.

I spoke with Brennan by phone the day before Thanksgiving, 2009. She was distracted by the old movie playing on TV in the background, and her memory wasn’t as sharp as it used to be. She apologized for the latter, but not for the former. “Why don’t you write about dementia?” she wanted to know. “And tell people to get ready for it!” 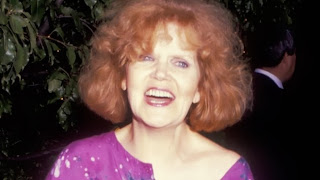 She’d survived a horrific traffic accident, though she said she didn’t know whether her memory trouble had anything to do with the head injuries she sustained then. She’d also survived breast cancer and an addiction to painkillers; she was a recovering alcoholic, too, perhaps not unlike the woman she played so memorably on thirtysomething, Elliot’s mother.

But the key word here is “survivor,” and what I took away from our conversation was that Eileen Brennan was — and I say this with the greatest possible admiration and affection — one tough, thoroughly adorable, pretty damn crazy old cat lady. “Life is hard, that’s all I have to say to that,” she said to me, and she lived 80 years of incident and enthusiasm. 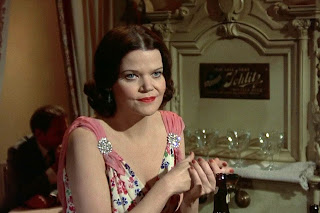 Her first inspiration was Jane Powell, she said, and she did perform in musical comedies, including Little Mary Sunshine and the original cast of Hello, Dolly! But I missed those; I know her work in movies and on television, where I feel as if I got a fair sense of her as a person.

Looking back, I’m struck by the infinite variations she brought to her own brand of world-weariness. Even before the picture started, you could tell that an Eileen Brennan character already had seen it all. Sometimes experience made her impatient, as in Private Benjamin or Will & Grace; sometimes she accepted her lot, as in The Last Picture Show or Murder by Death. But she kept going — most often with her sense of humor intact. 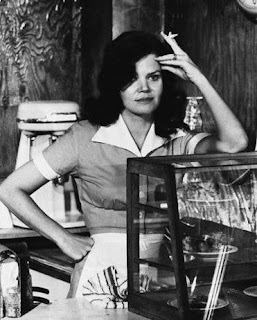 In The Last Picture Show.
I got a taste of her real-life impatience when we talked a bit about Off the Rack, a short-lived sitcom she did with Edward Asner. I’ve still never seen it, but Brennan had just run into the actress who played her daughter on the show, and so it was much on her mind. “We got brilliant reviews,” she told me, and yet the show was cancelled after six episodes. The younger actress had said to Brennan, “I don’t know what happened.” 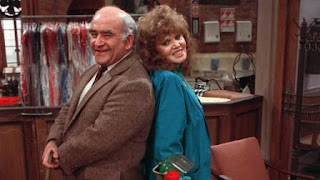 Just a couple of middle-aged people?
Asner and Brennan in Off the Rack.
“Maybe [the network] didn’t want two middle-aged people,” Brennan mused. “And fuck them! We were so happy together. I ran into one of those assholes [the network programming executives] in the supermarket and said, ‘You did the wrong thing, and you were wrong.’”

She said she still missed Asner and Dennis Haysbert, another co-star in Off the Rack: “I cried when the show broke up.” At the time of our conversation, I had recently interviewed Asner, Madeline Kahn’s co-star in Born Yesterday on Broadway, and so, with Brennan’s endorsement, I called his office and passed along Brennan’s phone number. I hope they spoke again — at least a few times. 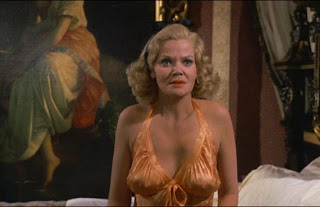 In Murder by Death.
“I love actors to death,” she told me. “They really mean a lot to me, because they work so hard, and they have to put up sometimes with such shit. I really feel sorry for actors, but I love them. Carol Kane called the other day and said she was offered a thing and said, ‘No, that’s not for me. Call Eileen Brennan.’ You’ve got to remember when you’re working with other actors, don’t put ’em down — because other actors get you work.” 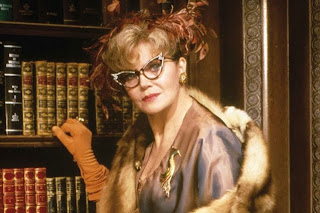 As Mrs. Peacock in Clue.
Brennan and Madeline Kahn met and became friends during the filming of At Long Last Love, when they would commiserate late into the evening about the long rehearsals and the endless takes and retakes, in which all the actors sing live on-camera. At some points, they were getting together on an almost nightly basis, and though their friendship ebbed and flowed over the years, Brennan recalled Madeline with lasting affection.

“If Madeline were here — ” she started to say, then gave an audible shrug. “She missed all this shit that you go through when you get old. I salute her. It’s not easy, not easy at all.”

In Will & Grace.
I’m not overstepping the limits of biography when I suggest that, if Madeline were here, she’d be grieving today for her co-star and friend. And personally, I know that, as an audience, I’m grieving for an actor who brought such life and such wit to her work — and who did so much to teach me the challenges but also the virtue of indomitability. Only death could keep Eileen Brennan down. 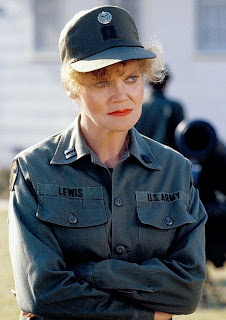 And as long as we’re watching her movies —
she may be down, but she’ll never be out.

Posted by William V. Madison at 9:57 AM No comments: